In support of Black History Month, we are showcasing three black athletes we have been honoured to work with as JOGA clients. We admire each of these athletes for their power, strength, and achievements not only in sport, but in shaping history and culture. 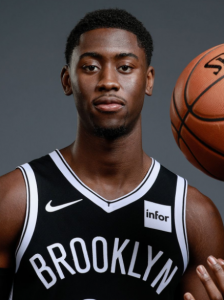 Caris LeVert is a Canadian/American basketball player, playing as Small Forward and Shooting Guard for the Indiana Pacers. Though born in Brampton, Ontario, LeVert grew up in Ohio playing basketball in high school. He then went on to play in college with the Michigan Wolverines. He was almost redshirted in his freshman year, but his coach saw potential in him and finally put him in to play. LeVert was expected to be a 2015 NBA draft selection in 2015, but due to a foot injury, this was halted until a year later. Amidst growing doubt and speculation about his ability to come back from his injury, LeVert sent a letter to the NBA general managers before the 2016 NBA draft. In this letter, LeVert spoke of his ongoing resiliency in the face of adversity, from losing his father at a young age to his injury. LeVert went on to be the Indiana Pacers’ 20th pick in the 2016 NBA draft and made his professional debut playing against the Denver Nuggets.

LeVert is known for his advantageous height, athleticism, intuitive skill, and above all else: his hard work and determination to overcome anything that is thrown his way. Most recently, this courage was proven again as LeVert underwent surgery to treat a small mass found on his kidney that ended up being renal cell carcinoma. This mass was discovered during a team physical being done before the finalization of his trade to the Brooklyn Nets back in 2016. LeVert is expected to make a full recovery with no further treatment needed and was traded back to the Indiana Pacers in 2021. LeVert’s confidence and toughness is an inspiration to us all to continue working toward your dreams despite what obstacles you may face and we wish him a speedy recovery!

Born in Toronto Ontario, Jamal Mayers is a former professional hockey player who played 15 seasons with the NHL. Mayers began skating at a young age and joined youth hockey programs in Toronto while growing up. He then went on to become a star player at Western Michigan University. Mayers’ professional career began when he was drafted 89th overall by the St. Louis Blues in the 1993 Entry Draft. During Mayers’ prosperous career, he also played with the Toronto Maple Leafs, Calgary Flames, San Jose Sharks, and Chicago Blackhawks, winning the 2013 Stanley Cup as a member of this team.

Mayers is recognized as being part of an important shift for inclusion of Black hockey players in the NHL. Throughout his career, he promoted diversity issues in the NHL and worked to increase opportunities for inner-city hockey players. Mayers is also a good friend of JOGA, having taken our certification and participating in our Home Team Together initiative. Mayers now works as an analyst for the NHL Network and NBC Sports Chicago and continues to heroically advocate for race and gender representation in hockey. 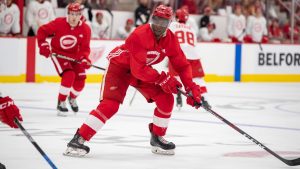 Givani Smith is a Canadian professional ice hockey player born in Thornhill, Ontario. Before beginning his professional career, he played four seasons in the Ontario Hockey League. Smith currently plays for the Grand Rapids Griffins of the American Hockey League as a prospect for the Detroit Red Wings of the NHL. He was drafted 46th overall by the Detroit Redwings in the 2016 NHL Entry Draft.