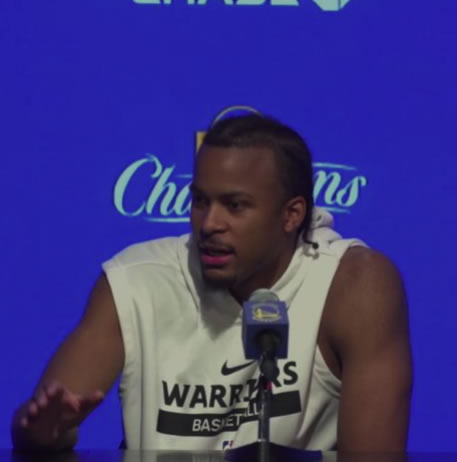 SAN FRANCISCO – Warriors guard Moses Moody, running faster and jumping higher than he did as a rookie last season, credits an unlikely source for his increased athleticism.

“I’d like to dedicate a lot of my newfound athleticism to Kevon Looney,” Moody said last week, barely concealing his grin.

Would that be Kevon Looney, your Warriors teammate? The guy with two surgically repaired hips, does an impressive job of managing neuropathy but is more of a chugger than a sprinter?

“He put me onto Joga in the middle of last season,” Moody said. “Through high school and through college, I had been feeling aches and pains. A little tendinitis. But I’d do the Joga, and that’s been really big.”

Joga, according to jogaworld.com, “involves physical postures, breathing, and relaxation techniques. However, where the goal of Yoga is to become more flexible and spiritually aware, JOGA’s aim is to enhance performance, improve concentration, and reduce recovery time within the context of an athletic environment.”

Joga is a portmanteau word combining jock and yoga. Moody saw Looney lead the NBA in games played last season with 104 – all 82 in the regular season, 22 more in the postseason – and, aware of Looney’s history, felt this was an experiment worth trying.

Looney practices it each morning before practice and now he has a disciple.

“I’m just following a lot of steps that he took,” Moody said.

Moody added that in addition to Looney, he has gotten help from the strength and training staffs. Upon arrival in the Bay Area after the 2021 NBA draft, he approached Dr. Rick Celebrini, the vice president of player health and performance about his untapped athleticism and told him of periodic knee soreness.

“If we get my knee fixed,” Moody recalls telling Celebrini, “I promise you there’s an athlete contained inside of me.”

Moody is raising eyebrows in practices and workouts by moving more quickly than he did last season dunking with authority. With Jordan Poole starting in place of Klay Thompson in Golden State’s three preseason games thus far, Moody was the first player off the bench in all three games.

When Moody scored 12 points in a preseason win over the Wizards last Sunday in Japan, his field goals were two 3-pointers, two dunks and one reverse layup. The shooting was no surprise. The flight time on the dunks came, oddly enough, came courtesy of one of his teammates.

If he didn’t nod and wink toward Looney, he probably thought about it. 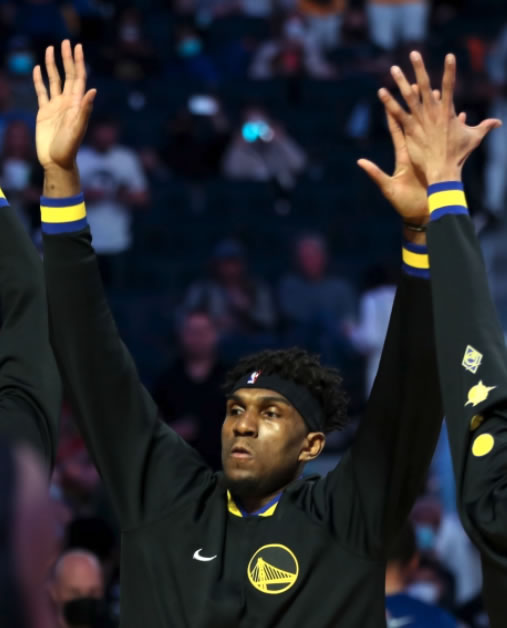 Only one player has appeared in all of Golden State’s 60 games: Kevon Looney, closing in on a goal he set before the season

SAN FRANCISCO — With 22 games to go, freshly rested from an All-Star break spent on the beaches of Mexico, Kevon Looney can see the finish line. The goal he set at the start of the season, one he never thought was realistic until this year, is this close to materializing.

The lessons learned and adjustments made after a trying past two seasons, including a series of trials and errors, left Looney feeling confident in himself entering this season: He wanted to play all 82 games for the first time in his career.

It’s increasingly rare in this day and age for a player to notch all 82 games. Michael Jordan did it seven times; LeBron James just once (and Steph Curry never). Looney is one of seven players league-wide who has yet to miss a game this season — one of two to start them all.

“Loon has always been a favorite in our organization for so many people based on who he is,” Kerr said. “The last couple years were really tough on him health-wise. To see him healthy and playing night in and night out brings everybody a lot of joy.”

After last season, his second straight hampered by injuries, the Warriors training staff approached Looney with a suggestion. There was a program, they told him, that could help with his mobility, which Looney admits, “is something I struggled with in the past.” So he gave it a shot over the summer and has since incorporated it into his game day routine.

In his seventh season, Looney’s role has swollen. He was a member of previous championship teams but rarely started. This year, he has been a fixture in the starting five, hearing his name boom during introductions before all 60 games so far.

The last time Looney was close to this reliable, his role wasn’t nearly this large. He played in all but two games in 2018-19 but made only 24 starts, making way for DeMarcus Cousins and Andrew Bogut on most nights. Still, he posted career highs in almost every statistical category, earning a three-year contract extension.

Then came the injuries.

The following season started off on a bad note and got worse. Looney missed the preseason with a strained right hamstring and appeared in only 22 games before the COVID-19 pandemic struck and shut down the Warriors’ season. Soreness in his hip kept him out six games; his abdomen an 18-game stretch.

But most importantly was his diagnosis with a rare nerve disorder, called neuropathy, that can make a person’s arms and legs go numb and, in Looney’s case, doctors believe, also lead to severe stomach problems.

Even doctors were flummoxed at first.

They recommended Looney scale back his diet to the extreme.

“Kind of a bland diet,” Looney said. “Not a lot of seasoning on it.”

They took away eggs. And oranges.

“I like breakfast,” he said. “That’s something for breakfast I ate everyday.”

But, slowly, he was able to expand his palate back to a place where, now, he says, he’s able to enjoy a wide array of food again, while keeping his neuropathy in check. A healthier diet brings added benefits, too.

Looney turned 26 earlier this month, but his newfound health has him feeling — and playing — better than anytime since he entered the league. Back then, he said, “I couldn’t play 20-minute games back to back, 30-minute games I’d need a day off.”

This season, he is averaging 20 minutes per game for the first time in his career and has logged two games with more than 30 (and another four with at least 28 minutes). As the Warriors’ only true big man, he is also on track to set career highs in scoring (6.4 points per game) and rebounding (7.5).

The number Looney cares about, though? Eighty two.

“My name is Tyler Russell. I play hockey for the Los Angeles Jr Kings. I have been practicing JOGA for over 2 years. JOGA has helped me get stronger, especially with the strength in my legs. I really enjoy doing all of the JOGA exercises along with the salutation and the stretches. I consider JOGA a secret weapon because my body is in pain during the workout but I know that the pain is what will make me stronger. My JOGA coach, Carlie Chiovetti, is awesome. She is great at teaching all of the exercises and really cares that we are making improvements every week to help me be a stronger athlete.”

“What benefited me the most is the way we worked on my posture. In addition to that, my hips and hamstrings were always tight in the past. Now they, never get tight and I feel very fluid.”

“To be successful on the field, you have to be both physically and mentally prepared! I believe JOGA is the perfect blend of recovery, performance, and conditioning. I love JOGA because it not only makes my body feel better, but it allows my mind to let go.”

“I was looking for something new and that made sense with how my players move. This is when I was introduced to JOGA, a movement based program to help my players recover and maintain strength and mobility without sacrificing time. I felt it was an effective way of training”

“When trying to establish a foundation of strength JOGA segments 1 and 2 are very good for teaching the athlete balance and body control. This helps to increase strength and explosive power down the line.”

“JOGA is different than a traditional yoga class as it takes into consideration how athletes move, train and digest information. It’s program based and encompasses all of the physical properties needed to support elite performance.”

“When I started with Jana this past summer I noticed an immediate improvement in the way I felt physically. She paid close attention to the way my body was built and my strengths and weaknesses, allowing me to work on and improve strength and mobility that would immediately help me as an athlete. The work was very specific and tailored to my position. I’m very confident that it helped me on the ice when the season started. I’m looking forward to working with her again in the future.”

“JOGA can be an integral part of the off-season training of any athlete. It is important, however, to find an instructor who understands the demands of your sport and the strength and conditioning program. Jana and the JOGA staff have a done a great job of tailoring a program to meet the needs of my athletes and are willing and able to customize their sessions based on my feedback.”